Using Math (and a Remarkable App) to Privately Combat Covid19

Combatting the coronavirus with apps is a challenge. With privacy and tracking concerns being an issue, how can it be done? Today's guest Po Shen Lo from Carnegie Mellon University talks about an app he's invented that uses a mesh network to help his college and also Georgia Tech combat COVID-19 among their students. This is a fascinating conversation that you'll want to hear about a new way to use smartphones in a way that doesn't compromise privacy but can be used to help many kinds of societal issues.   Show Notes:   Po Shen Lo - Bio As Submitted Po-Shen Loh is...

As we consider how we move back into school, we need to think about neuroscience research about how students learn. Dr. Jared Cooney Horvath talks about stress, learning duration, homework, spaced repetition, and sleep as well as computers and technology. You can't just have a longer school day to improve learning. You also can't always expect every technology to improve learning either.  Sponsor:  bracket challenge is back again for the fourth year in a row and voting is now open from March 22 to March 31. This year’s  features 32 scenarios that educators both miss...

Augmented Reality Lessons You Can Use Now

If you need safe, fun ways for students to connect and learn while keeping their distance in the classroom then augmented reality apps might be for you. But there are best practices you can use to teach math, ELA and more using Augmented reality. In today's show Mitchell Weisburg, cofounder of the nonprofit Games4Ed, shares pedagogical best practices for using augmented reality in the classroom with 3D Bear and other tools. Sponsor: bracket challenge is back again for the fourth year in a row and voting is now open from March 22 to March 31. This year’s features 32 scenarios that...

4 Social Emotional Learning Strategies to Use in the Classroom Now

We know that to teach students, we must relate to educate and one of the first things we must relate to is their emotions in that moment. In today's show, Robin Fox shares four techniques you can use in your face-to-face or distance classroom to connect with your student's social and emotional lives. She reminds us that student emotions are constantly in motion but we have to help them so we can unlock their ability to live better lives, listen, and learn. Let's tune in to our student's social-emotional learning and help them succeed. Sponsor:  is here! Enter now for a chance to win...

How to Create Massive Kahoot Games

Did you know that you can play massive Kahoot games with many students as players? Today's guest, George Pearce, talks about how he streams Kahoot games, handles security and privacy, fights bots that allow cheating and attack his Kahoot games and also how he deals with lag to make game competitions more equitable even when hundreds of miles separate the learners. He also shares the software he uses and tips to get started. You'll be able to use what you learn for any multiplayer gaming you want to hold across your school, district, or even across the world. Sponsor: is here! Enter now for a...

How to Partner with Parents During Pandemic Learning

Some schools need to reset their relationships with parents. Others want to make it stronger as they transition to a different form of learning. At the forefront of all of this is the psychological health of students during this time. JT Taylor is helping schools connect with parents and support them and today he gives advice to schools and teachers who are ready to move to better relationships with parents. Check out the show notes and links at Jahkari "JT" Taylor - Bio as Submitted Jahkari “JT” Taylor is an award-winning educator, author, researcher, and passionate speaker. JT is a 2016...

Teachers are stressing over so many things. Today, Dr. Desiree Alexander tackles three of those issues: distance learning, hybrid learning, and digital equity. She shares the WHO system for evaluating technology, tips for hybrid learning, and timeless principles for considering digital equity and relating to your students and colleagues in professional and respectful ways. Check out the show notes and links at Today’s sponsor: Advancement Courses. Choose from over 280 online graduate-level PD courses in 20 subject areas that are self-paced with up to six months to complete. Go to and save...

How to Close the Learning Gap

Students are returning to school and teachers and administrators know a learning gap is there. What do we do about it? How do we close the gap without stressing everyone out? Turnaround principal Rachael George tells us how. Today’s sponsor: Advancement Courses. Choose from over 280 online graduate-level PD courses in 20 subject areas that are self-paced with up to six months to complete. Go to  and save 20% off each course by using the code COOL20. That’s just $120 per graduate credit hour or $160 for 50 clock hours. You can also receive graduate credit through...

Distracted: Why Students Can't Focus and What You Can Do About It

Dr. James Lang has six recommendations in this podcast about how we can better understand student attention and how we can get their attention while we teach - even when teaching online. This important topic will help all of us become better teachers in challenging times. Check out the show notes and links at Today’s sponsor: Advancement Courses. Choose from over 280 online graduate-level PD courses in 20 subject areas that are self-paced with up to six months to complete. Go to and save 20% off each course by using the code COOL20. That’s just $120 per graduate credit hour or $160 for...

We can create fun ways to enjoy time with our families online in Zoom, Google Meet, Teams, and more. Today's guest, Sandi Johnson, is an IT Integrator in Indianapolis. She has created fun events for neighbors and families as well as her students to celebrate and grow closer during this time. If you are wondering how to connect with your family in new ways, listen to this show and plan some fun family events. Check out the show notes and links at Today’s sponsor: Advancement Courses. Choose from over 280 online graduate-level PD courses in 20 subject areas that are self-paced with up to six...

Students need our help to regulate their own emotions. Today, psychologist Dr. Jody Carrington helps us understand five ways we can connect with our students and help them regulate their emotions. Understanding these simple principles can help us connect, improve classroom management, and be better teachers.

Sponsor: E4Effort is a tool built upon the research behind helping students improve. Check out e4Effort for more information and to start encouraging effort with your students. Also, check out my recent review of e4Effort and sign up for a 30-day free trial.

We learned 5 ways to step back in but today, I’m giving you the Name that Child Challenge. I challenge you to call the names of as many children as possible in a positive way today as many times as possible. If you do this challenge with a friend, then share at the end of the day the kind of response you received from the children. 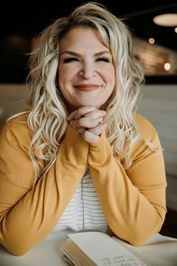 I grew up on a farm in rural Alberta.
My parents were high school sweethearts. My brother and I grew up together in a pretty happy place. Then my parents divorced. As adults, my brother and I learned that we had a full biological sister – who my parents had given up for adoption before we were born. I learned that even when you have a “secure base” and “safe haven”, sometimes you need a little help sorting out “your story”. For me, sorting out my own early story helps me be a better writer of the next chapters of my story – the one’s called “wife”, “mother”, “sister”, “friend”, and “psychologist”.

My “story” of becoming a psychologist started at Red Deer College. I transferred to the University of Alberta, where I earned my Bachelor of Arts with distinction in 1998. I completed a year-long internship during that degree with the Royal Canadian Mounted Police (RCMP) and became very passionate about police work and the significant toll that trauma can take on people. I was also lucky enough to spend some time working with some amazing families through Ronald McDonald House and I also volunteered with Victim Services. I then continued my studies at the University of Regina with the thought of pursuing a career in Police Psychology. Although I loved that work, my passion began to shift to families, especially those who experienced trauma. I completed my pre-doctoral residency in Nova Scotia in 2006 where I trained primarily in Cognitive-Behavioural and Narrative approaches. I completed rotations both with adults and children and learned that I really enjoyed understanding the “stories” of children—particularly those who had difficult experiences.

I returned home to Alberta and accepted a job at the Alberta Children’s Hospital in Calgary on the Inpatient and Day Treatment Units, a position that would forever change the course of my career. I quickly learned my “cognitive-behavioral skills” were not enough for kids and families with long and often traumatic stories with multi-generational influences. I needed to connect in order to have any significant impact. Desperate to learn more about attachment, I set off on a quest for mentors who “got it” and have been very lucky to have been influenced by some of “the greats”.

You will see a lot in my story about attachment. I have learned the power of the relationship. Empathy. Connection. I have learned that these are important for anyone who might want to understand their story and shift it in some way. Or heal in some way. Or repair it in some way. Or change their story once and for all. So that their next chapter as “teenager”, “spouse”, “parent”, or “friend” can be better. I have worked with adults and children, as well as families, and I would be honored to learn about your story and perhaps influence your next chapters.

Website: http://www.drjodycarrington.com/
Twitter: @jodycarrington
Facebook: https://www.facebook.com/drjodycarrington/
Instagram: @drjodycarrington
Disclosure of Material Connection: This is a “sponsored podcast episode.” The company who sponsored it compensated me via cash payment, gift, or something else of value to include a reference to their product. Regardless, I only recommend products or services I believe will be good for my readers and are from companies I can recommend. I am disclosing this in accordance with the Federal Trade Commission’s 16 CFR, Part 255: “Guides Concerning the Use of Endorsements and Testimonials in Advertising."