File 020: THE SIX MILLION DOLLAR MAN - "Straight on Til Morning" 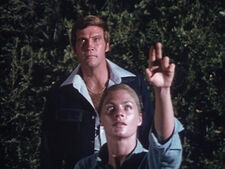 Synopsis: Steve tries to help an alien family trapped on Earth from being captured by a fearful public and a curious Oscar Goldman.

John and co-host, artist Jerry Lange, are on their own for this episode as they discuss character motivations from episode to episode, the actor Cliff Osmond, and the novelization of this episode