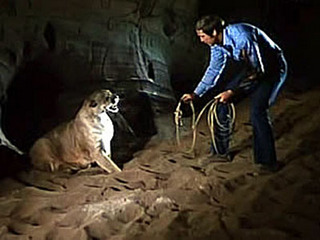 Synopsis: Steve is determined to save a wild cougar before it is killed by a mob and a young woman who wants revenge for it killing her father.

John and co-host, artist Jerry Lange, are joined by voice actor/writer Julie Hoverson as they discuss the different style of story that we deal with here, Steve's relationship with EJ, and how silly Taneha looks as an overweight, drugged cat.