Succotash Shut-In Epi242 with Tyson Saner features a trio of clips from the Valley Boys soundcast, The Dinner Party Download, and The Record Store Day Podcast. And if you're feeling a tad "kidnappy", we're sponsored by Henderson's Pants new Ransom Pants!

Episode 240 features clips from the soundcasts What Had Happened Was, Oprah's Master Class, and The Al Franken Podcast. Also: A throwback Henderson's Pants ad from way back in Epi200 for their Bicentennial Pants!

Succotash Epi239 dips into the world of roleplaying soundcasts! We've got clips from The Adventure Zone, AllD20, Critical Role, and Nerd Poker. This episode is brought to you by longtime sponsor Henderson’s Pants and their new Scavenger Slax!

Epi238 features a bit of a chat with Andy Dick AND a trip of soundcast clips for you, from Jock Doc Podcast, Battle of the Bald, and Trashy Trashy. Sponsored by Henderson's Pants & Trumpoetry.com

Our guest this episode is the amazingly hard-working and detail-oriented Chris Mancini! You probably know Chris from his ten-year tenure aboard the Comedy Film Nerds, but Chris has a lot going on, from graphic novels and not one, two, but three soundcasts. We talk about it all and dig a little bit deeper into the history and the mystery that is Chris Mancini…

Succotash Shut-In Epi236 has clips from Love, Alexi, Strange Times, and In the Envelope: The Actor’s Podcast. There's also a strangely topical advertisement from our longtime sponsor Henderson's Pants, and a final reading from TrumPoetry.com.

This week host Marc Hershon is featuring clips from such comedy wonderfulness as "Fantastic! with Dana Carvey", "Conan O’Brien Needs A Friend", "Aunty Donna Podcast", and "From The Oasthouse with Alan Partridge".

Saluton and feliĉan Kristnaskon! Estas mi, Tyson Saner, your host this week on the final Succotash Shut-In episode for 2020. And what an episode it is! Comedian, actress, improvisational performer, soundcaster, and all-around great person Cassandra Cardenes joins me for her very 1st Succotash episode as we talk at length about the Christmastime movie classic (?), the 2003 Richard Curtis-directed film with the sizable ensemble cast: Love, Actually.

Becca James is our guest this episode. A freelance writer who has a major focus on soundcasts – and she writes about comedy, music, and a variety of subjects. We cover how she got into writing, what she likes about the gig, and about why she’s never seriously considered starting up her own soundcast.

Saluton! Estas mi, Tyson Saner. Welcome to Succotash Shut-In, as this soundcast continues to be known into this new year, which is 2021. Welcome to Epi236: The first show of 2021 that I have hosted. How has your year been so far?…Yeah, I feel you. We carry on because we must...and as we do, some of us look for distractions.

Soundcasts, or "podcasts" as much of the world still refers to them, are one such type of distraction. Comedy is another type of distraction entirely... in fact it is multiple types of distractions due to the subjective nature of "comedy". Some of the content this soundcast samples for you will be funny... but not to all of you. Technically, I'm not necessarily looking for funny content as I gather clips. I gravitate toward listening to people I find interesting. Maybe that's how you feel about it as well.

Last week in Epi235 my soundcast co-host... or every-other-show-host Marc Hershon…brought you a quartet of clips from the soundcasts Fantastic! with Dana Carvey, Conan O’Brien Needs A Friend, Aunty Donna Podcast, and From The Oasthouse with Alan Partridge. It was a great episode and I encourage you to listen to it if you have not already. It can be found on the show's website www.succotashshow.com as well as on Google Podcasts, Apple Podcasts, Stitcher, iHeart Radio, Laughable and YouTube... audio only. 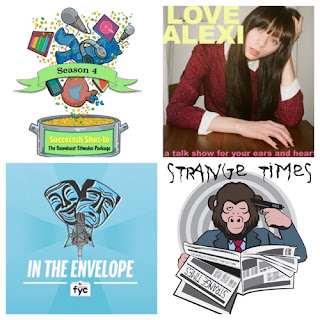 This week in Epi236 I've got clips from Love, Alexi, Strange Times, and In the Envelope: The Actor’s Podcast. I've also got a strangely topical advertisement from our longtime fake sponsor Henderson's Pants, and a reading from what will presumably be some of the last entries posted on TrumPoetry.com . I have referred to TrumPoetry.com many times over the years as "the 100% fake sponsor with the 100% real website" because I really want people to visit the website and appreciate the awesomeness of the work contained on it created by Joe Paulino. It has been a helluva journey…

Love, Alexi
Described as "a talk show for your ears and heart", Alexi Wasser's Love, Alexi, is a soundcast where she "speaks to creative people who inspire me & discuss who they are, how they got there, sex, love, dating, feelings, life, & everything in between." Our clip is from December 21st of 2016, and features guest Dino Stamatopoulos, where they get into the time Dino was almost a cast member of the show "I Love Dick"." (You may remember him as the recurring characters Starburns on NBC's Community.)

Strange Times
Strange Times is a weekly comedy & satirical podcast presented by longtime friends of Succotash Davian Dent, Kat Sorens & Dom Risk. From the January 12th episode #309, "Lost in Translation", from just last week. This clip features the trio discussing the biggest news story of the new year and how they are reacting to it across the pond as it were.

In the Envelope: The Actor’s Podcast
Backstage has been the #1 resource for actors and talent-seekers for 60 years. In the Envelope, Backstage’s podcast, features intimate, in-depth conversations with today’s most noteworthy film, television, and theater actors and creators. Hosted by Jack Smart, the Awards Editor at Backstage, this is a guide on how to live the creative life from those who are doing it every day. Our clip comes from July of last year, an episode with guests Eugene Mirman and John Roberts. The snippet itself features audio from John Roberts' portion of the interview.

I do hope you find something enjoyable in today's offering. Next week, Marc Hershon will be at the helm of Epi237 and I'm hoping you will come back to us then, and the following week where I will presumably be hosting Epi238.

Sometimes I don't really know what to say at the end of these. I want to wish you all a happy week or as happy as you can make it. Mental health is important. I'm still in production of my coming soundcast Happiness, or Something Like It and my plan is to have it release before my next episode of Succotash Shut-In but, as I often say, "life happens" so I am not going to beat myself up too much if that doesn't work out. I'll let you know when it comes out on my Twitter, which is @revt23. (It will most likely be on my personal Soundcloud which you can find a link to at www.tysonsaner.com or by going to Soundcloud.com and typing "Tyson Saner" into the search. You can also find links to my YouTube channel, and my wife's YouTube channel there…and we'd appreciate it if you'd drop by and give our content a look. There's a whole archive to be perused.

As far as Succotash Shut-In goes, we'd really appreciate it if you could take a moment to rate and review us on Apple Podcasts, Stitcher, Google Podcasts or wherever other folks might read it. You'll be doing us a big favor if you do. Sharing us is one of many ways you can show us you care. It's also what we mean when we implore you to Please, Pass The Succotash.