Misrepresentation is one of the most serious wrongdoings that the applicant for Permanent Residence in Canada can do. In other words you want to avoid misrepresentation at all cost throughout each stage of the immigration process. And let's call things by their proper name - lying is never a good idea whether you're lying in immigration or any other context. However, what if you never intended to misrepresent your case or did not even know that you have misrepresented something? This is just one of the issues that I have discussed with Rekha McNutt in today's episode of the Canadian...

Losing your status in Canada is the worst nightmare for Permanent Resident. Unfortunately, many Canadian PRs end up losing their Permanent Residence status. One of the common ways to lose your PR status is by not meeting the residency requirement. In this episode Rekha McNutt joins me once again for our Special Series of Immigration Hearings and Appeals to discuss specifics of residency requirements and filing appeals of the Removal Orders at the Immigration Appeal Division (IAD).

For US companies relying upon foreign workers, Monday, June 23, 2020, was a day of significant disappointment. Fortunately, Canada's immigration policy is far more welcoming. If you are a US company that is going to be hurt by these latest rounds of restrictions, Canada may just be the answer. Tune in to this episode where US Immigration Attorney, , explains what these restrictions mean for your company and Canadian Immigration Lawyer, , shares some great "made-in-Canada" solutions to turn your disappointment into relief. Many US companies were left reeling on Monday, June 23rd when...

079: Is the IELTS really better than the CELPIP Test?

Are you frustrated with your language scores? Have you considered writing both language tests? If you want to improve your scores, you have to listen to this episode with professional language instructor Garret Lim. He shares the real goods on what makes the IELTS different than the CELPIP. You can decide which one is better. In this episode, Garret Lim shared some great insight into exactly what the CELPIP and IELTS tests cover. By knowing the differences between the two tests, you can make the right choice as to which is going to allow you to score the highest. After all, your entire future...

During this episode Canadian Immigration Lawyers Mark Holthe and Arghavan Gerami get into discussion on whether the approaches taken by the CBSA during COVID-19 go in line with the principles of the Open Government, transparency and rule of law. Lack of responsiveness to the dialogue between CBSA and law practitioners and public played important role in formulating the view that people were left on their own in figuring out the details of the legal basis upon which the officers make their decisions at the border. In a pandemic people need more transparency and clarity on new policies and... This is the second part to our Canadian Business Immigration series. Just as in the previous episode, Canadian Immigration Lawyers Mark Holthe and Jeffrey Lowe discuss different business immigration strategies available to investors to Canada. However, this time there will be much more specifics and business immigration case studies. We are going to pull the curtain back on options that potential business immigration clients may want to consider as they look to invest in Canada and use that investment of time and money to secure permanent resident status for them and their families. For the...

Since 2014 Canada has been without any real immigrant investor program at a federal level. However, in this episode we are going to pull the curtain back on three great options that your business immigration clients may want to consider as they look to invest in Canada and use that investment of time and money to secure permanent resident status for them and their families. It was great to have Canadian Immigration Lawyer Jeffrey Lowe join me to shed some light on some of the best business immigration options available for entrepreneurs and like-minded foreign nationals who are looking to...

075: International Students in Canada - What the future holds with Will Tao

With over 700,000 international students in Canada, has been struggling with what to do with them all. Many of these students are wondering if they have a future in Canada over the long term. In this episode Canadian Immigration Lawyer joins me talk about some of the challenges students experience when studying in Canada and some essential tips to avoiding the most common pitfalls. I was super happy to have Will Tao join me again after an almost four year absence on my Podcast. The last time he joined me, he was just cutting his teeth in the world of immigration law. However, he has worked...

During this episode Canadian Immigration Lawyers Mark Holthe and Arghavan Gerami get into discussion on whether the approaches taken by the CBSA during COVID-19 go in line with the principles of the Open Government, transparency and rule of law. Lack of responsiveness to the dialogue between CBSA and law practitioners and public played important role in formulating the view that people were left on their own in figuring out the details of the legal basis upon which the officers make their decisions at the border.

In a pandemic people need more transparency and clarity on new policies and procedures that the Government implements. However, as discussed during this episode many attempts to bring clarify and request any information that would allow people to be aware of new changes in cross-border travel were left unanswered. The host and guest of this episode also address the issue of lack of communication from the Government in interpreting what is considered to be “non-essential” purpose. All these factors directly affected many refugee claimants and people attempting to cross the border, but eventually turned away because of the “optional/non-essential” nature of their travel. Arghavan Gerami is the Founder and Senior Counsel at Gerami Law Professional Corporation (‘PC’), a full-service immigration law firm in Ottawa, Ontario.  She completed her Juris Doctor and Master of Laws at Osgoode Hall Law School, York University and was called to the Ontario Bar in 2007.

Ms. Gerami worked at the Ministry of Attorney General and the Department of Justice before transitioning to private practice in 2011. She also had the privilege of serving the Honourable Mr. Justice M. Evans at the Federal Court of Appeal.

Since founding Gerami Law PC in 2011 Ms. Gerami has focused her practice on immigration and refugee litigation and represented numerous clients before the Federal and provincial Courts, as well as the various divisions of the Immigration and Refugee Board.

Ms. Gerami is an Executive Member on the Immigration Law Section of the Canadian Bar Association.  In 2017 and 2018 Ms. Gerami also served on the Organizing Committee of the annual CBA Immigration Law Conference.  She has been interviewed on national and local television, and quoted in national and local newspapers such as the Globe and Mail, National Post and the Ottawa Citizen.  Ms. Gerami has also published numerous journal articles, presented at immigration and refugee law conferences and events across Canada, and provided guest lectures at the University of Ottawa.

As a Supervising Principal to articling students, Ms. Gerami enjoys facilitating the career development of law students and young lawyers. She also enjoys travelling as a well as spending time with her two children, husband and Bambi (her dog). Show notes summary: [NOTE: Igor try to soft the information below and write up the show notes so that they are not quite as harsh]

COVID-19 has had a tremendous impact on immigration and the way immigration law is practiced in Canada. Pandemic revealed a whole set of challenges with transparency and in some instances, showed the unwillingness of the authorities to reveal the bases upon which the decisions by the CBSA are being made.

Uncertainty, inconsistent application of the rule of law, and many other issues, exacerbated by COVID caused concern among immigration lawyers. At some point it seemed like CBSA has been conducting itself as if it’s above the rule of law. Here are just some of the issues discussed and analyzed during the podcast:

- refusing to disclose the manual on what constitutes essential purpose, that is being applied to make administrator decisions with very significant consequences;

- a number of reports about inconsistent application of the rule of law, complicated by the continuous modification of policy, made it difficult for people to know and understand their rights;

- some of the media reports of serious misconducts.

Overall, recent events and experience of Canadian immigration lawyers raise concerns regarding the lack of accountability and transparency in actions of the immigration authorities.  Without a doubt there is an understanding that the Government had to deal with unprecedented challenges, but there are also the expectations of respect, transparency, openness to dialogue and observance of the rule of law by the CBSA.

People need to be able to trust decision makers, individuals in the positions of power and have the right to know details of the acts used to make decisions on the cases that affect them. This is particularly true in times when individuals are experiencing significant fear and anxiety due to a pandemic. 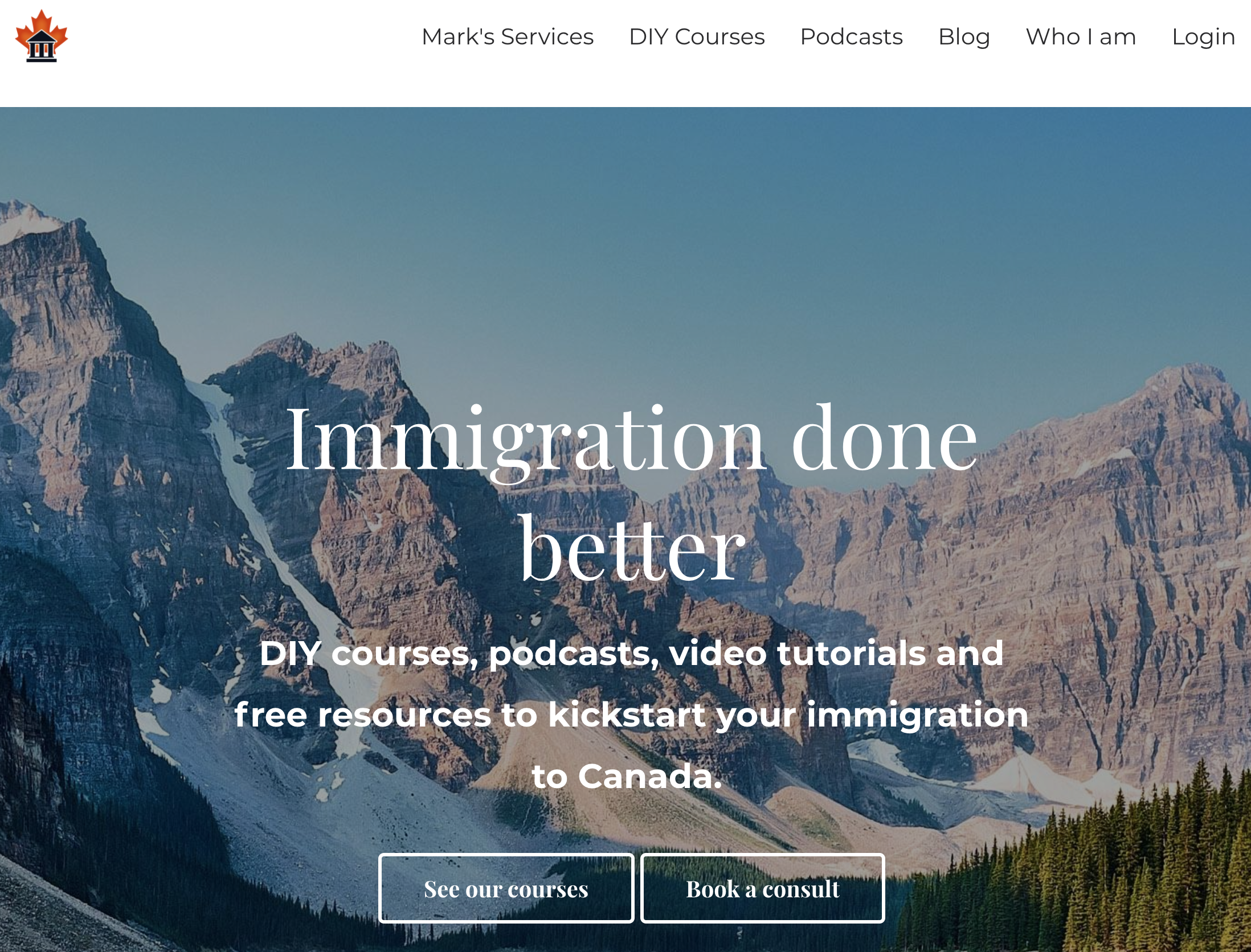 [Tweet "Business Immigration programs are alive and well in Canada."]

[reminder]If you have a suggestion for topics we could cover in the Podcast, please drop me a line at mholthe@holthelaw.com. If you know of anyone that would be interested in coming on the Podcast as a guest, please send them my way. share on facebook, share on twitter, share on LinkedIn[/reminder]