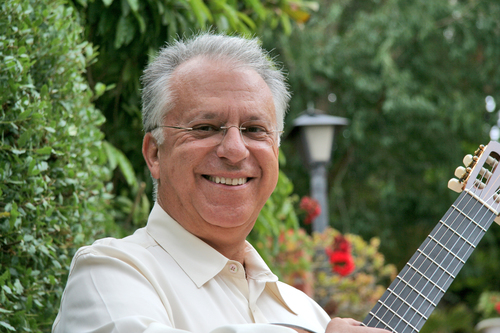 Guitarist, Pepe Romero, is a legend among musicians. His career has included decades of incredible performance and pedagogy. In this interview you will hear a series of stories that shaped his life as a musician.

There are very few true living legends in the world of classical music, few who have sustained greatness and grown throughout their lives. Pepe Romero is such an artist. He has been honored by kings, heads of state, and major institutions-the encomiums continue to pour in. But to Romero, his most important contribution has been reaching the common man. He has communicated the richness and beauty of the classical guitar to millions of people throughout the world. He has, indeed, become an ambassador of classical music, and, correspondingly, of the classical guitar.

But this gift did not just appear out of nowhere. Pepe is the second son of one of the greatest guitarists that ever lived—Celedonio Romero. And he is brother to two more musical phenoms—Celin and Angel Romero.  But perhaps we should start at the beginning...

Pepe was born in Málaga, Spain, in 1944. In those days, following the devastating Spanish Civil War (1936-39) and during the Second World War, Spain was in desperate economic straits.  Basic survival was the primary challenge. Yet, despite this, Celedonio Romero and his remarkable wife, Angelita, instilled in all three of their children a love of music that transcended the profound misery surrounding them. 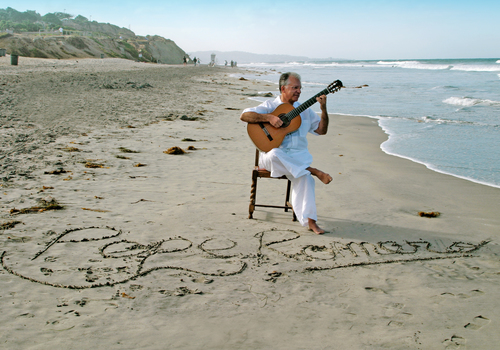 By age seven, Pepe set foot on the concert stage for the first time, at the Teatro Lope de Vega in Sevilla. And now, more than sixty years later, he continues to mesmerize audiences throughout the world. During that time, he has given literally thousands of concerts worldwide, many with the remarkable Romero Quartet, and many as a solo instrumentalist. He has worked with almost every major conductor and has to his credit more than 60 recordings (among which are 20 concerto recordings with the Academy of St. Martin-in-the-Fields, with both Neville Marriner and Iona Brown).

In 1992, Pepe Romero performed on a groundbreaking laser disc of the Concierto de Aranjuez with Neville Marriner and the Academy of St-Martin-in-the-Fields. He played a prominent role in the major film documentary Shadows and Light: Joaquin Rodrigo at 90, which received numerous plaudits worldwide (including the Chicago International Film Festival, International Emmy Awards, and San Francisco International Film Festival). In 2005 the Romero Quartet recorded Concierto vasco para 4 guitarras y orquesta by Francisco de Madina (written for the Romeros) with the Basque National Orchestra on a Claves release (entitled Aita Madina). A prominent recording entitled The Romeros: Generations, features premieres of works by Jorge Morel (such as El Maestro, dedicated to Celedonio) and by Pepe himself, Recuerdos del pasado. In the spring of 2005, a solo recital release called Corazón Español became available on the CPA Hollywood Records label. Shortly thereafter, on the same label, came Classic Romero, another invaluable recital recording. In the summer of 2008, Pepe Romero recorded a splendid solo guitar-vocal work by Lorenzo Palomo, with internationally recognized Spanish soprano Maria Bayo. It includes the song cycles Mi jardín solitario (with texts by Celedonio Romero) and Madrigal and Five Sephardic Songs and was released on the NAXOS label in 2009 along with Palomo’s Concierto de Cienfuegos with the Romeros Quartet and Rafael Frühbeck de Burgos conducting the Seville Royal Symphony Orchestra. Celebrating their 50th anniversary and released in 2009, is a recording by the Romeros for Sony´s RCA Red Seal Label entitled Los Romeros: Celebration. In November 2011, Deutsche Grammophon released Christmas with Los Romeros featuring the Romeros and Christmas favorites.  A new Spanish solo guitar CD Spanish Nights performed by Pepe Romero includes a premiere recording of Suite Madrileña No.1 by Celedonio Romero and was released June 2012 by Deutsche Grammophon.  In November 2012 Pepe Romero received a Latin Grammy Nomination for “Best Classical Album” for his recording of Concierto festivo by Ernesto Cordero. Celebrating his 70th birthday DECCA released an 11 CD set of recordings entitled “Pepe Romero: Master of the Guitar.” Recent recordings include a CD entitled Aloha España featuring guitar and ukulele performances with Daniel Ho. Released in October 2016 by Dacapo Records is a historic live performance DVD of Concierto de Aranjuez with his great life-long collaborator and friend, Rafael Frühbeck de Burgos conducting the Danish National Symphony Orchestra.  Among his recent releases are Torroba: Guitar Concertos Vol I and Vol II, both CDs are part a series of recordings (shared with guitarist Vicente Coves and conducted by Manuel Coves) for NAXOS of the complete guitar concertos by Federico Moreno Torroba.

Erika Block with Pepe Romero after taping Inside the Notes

Maestro Romero's many accomplishments include: world premieres of Rodrigo´s Concierto andaluz (with the Romero Guitar Quartet), Concierto madrigal (with Angel Romero), and Concierto para una fiesta (written for Pepe Romero); Federico Moreno Torroba's Diálogos entre guitarra y orquesta (Pepe was personally chosen by Torroba and Andrés Segovia for the world recording premiere of this work dedicated to Segovia with an extended guitar cadenza written especially for Pepe), Concierto Ibérico by Torroba (written for and performed by the Romeros), Concierto en flamenco by Torroba was premiered in Málaga (performed by Pepe with Angel Romero conducting); and Lorenzo Palomo's Concierto de Cienfuegos (with the Romero Quartet) and Nocturnos de Andalucía (both released on the Naxos label). Of the many guitar concertos by his father, Celedonio Romero, Pepe has performed the world premieres of Concierto de Málaga, Fiesta Andaluza and El Cortijo de Don Sancho. Other premieres include Troubadour Music for four guitars and orchestra by Morton Gould, Concierto vascoand Concierto flamenco by Francisco de Madina, Concierto festivo by Ernesto Cordero, Christmas Suite for four guitars and chamber orchestra by Massimo Paris, Concierto a Celedonio by Enrique Diemecke, Concierto Mariachi by Michael Zearott and the guitar concerto, Zareh, by Loris Tjeknavorian. He also revived the great orchestral work Metamorfosi de concert by Xavier Montsalvatge, with Gianandrea Noseda, and premiered as well as recorded the Concerto for Guitar and Orchestra with Trumpet Obbligato by Paul Chihara, with Neville Marriner and the London Symphony. In April 2014 Pepe Romero performed the German premiere in the Berlin Philharmonic of a new work by Lorenzo Palomo – Fulgores - for violin, guitar and orchestra. Upcoming projects include premieres of new guitar concertos by the wonderful Italian composer, Massimo Paris and by the imminent Spanish composer, Jose Peris Lacasa. 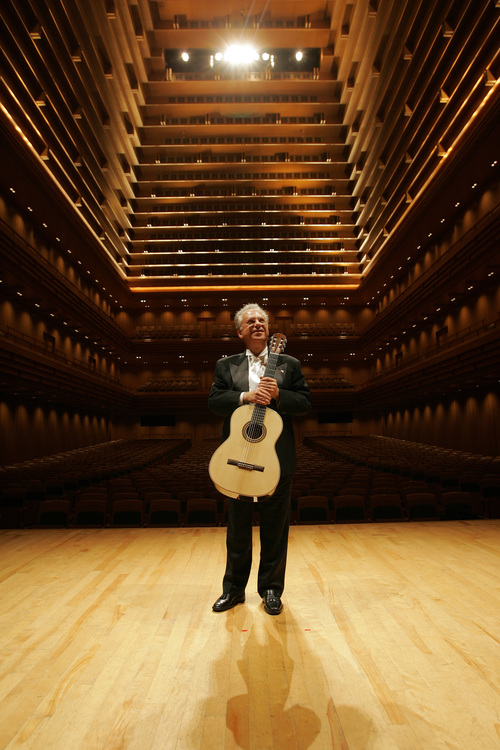 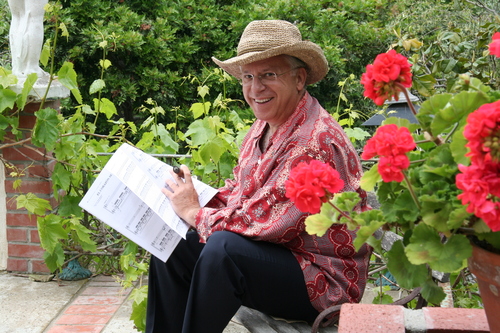 Pepe Romero has always felt, along with his father and brothers, that the sharing of one's art is a personal responsibility. Mr. Romero has served as Professor of Guitar at the University of Southern California, University of California at San Diego, Southern Methodist University, and the University of San Diego. Every summer at the Celedonio Romero Guitar Institute, currently held at Oklahoma City University, the Romeros conduct an intensive guitar workshop including master classes, private lessons, student concerts and a final concert featuring the students performing with the Romeros. Pepe has conducted master classes at the Salzburg Summer Academy, Córdoba Guitar Festival, and the Schleswig-Holstein Festival. In 2004 he was appointed Distinguished Artist in Residence at the University of Southern California's Thornton School of Music. His newly revised guitar method “La Guitarra” was published and released by Tuscany Publications in 2012. Currently he is finalizing a teaching video that discloses the principles of the Pepe Romero guitar technique. 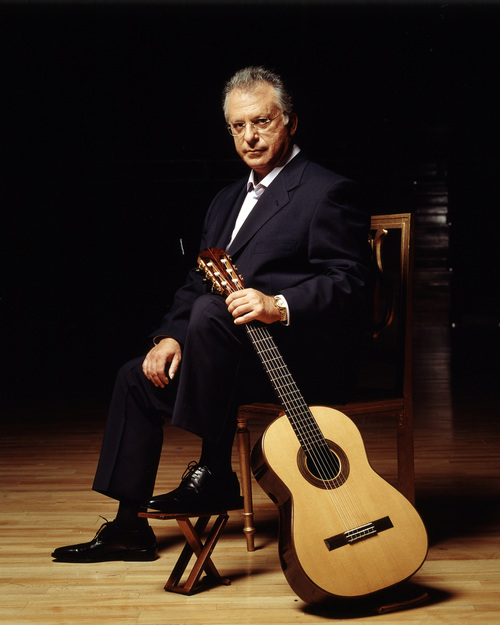 Pepe Romero holds honorary doctorates in music from the San Francisco Conservatory of Music and the University of Victoria, British Columbia. In June 1996, he received the "Premio Andalucía de la Música," the highest recognition given by his native land for his contribution to the arts. In addition, His Majesty, King Juan Carlos I of Spain, has knighted Pepe and his brothers into the Order of "Isabel la Católica."  In June 2018 he received the Medalla de Honor from the Real Academia de Bellas Artes de Granada for his lifelong achievement in performance and pedagogy.

A biographical documentary about the Romeros appeared on PBS in 2001 entitled "Los Romeros, the Royal Family of the Guitar."  Following this production, German television released another brilliant documentary about the Romeros entitled ¨Los Romeros, the Dynasty of the Guitar."  In 2007, the Romeros received the President's Merit Award from the Recording Academy, producers of the Grammy Awards, for their significant contributions to the music world and professional career achievements.