In today’s Solidarity Fridays episode, Kyle and Joe talk about what they've been up to in the last few weeks: doing drugs! Kyle first tells us about his recent experiments with revisiting salvia (which is legal in his state) and how different the experiences were from his young-and-dumb experiments as a teenager- how smaller doses in more ceremonial settings with years of experience in breathwork-inspired non-ordinary states of consciousness helped him see salvia differently. He talks about feeling like he just met the spirit of salvia, and the first message was to "respect the plants." He...

In this episode, Joe Interviews Dosed filmmakers Tyler Chandler and Nick Meyers, as well as the subject of their documentary, Adrianne.

Nick and Tyler tell the story of how they went from really knowing very little about the psychedelic healing movement to becoming advocates solely from a panicked call from Adrianne.

Adrianne speaks of her journey from opiate addiction and severe depression to trying mushrooms and eventually learning she needed Iboga and a community around her to really fight her way out of a life she no longer wanted to live.

They touch on the costs of Iboga compared to other rehabilitation methods, the often glazed-over dangers of Iboga, the effectiveness of psilocybin against opioid withdrawal, anxiety in the western world, holotropic breathwork as a safer method towards healing, the power of the Pixar movie, Inside Out, and why it would be beneficial for young viewers to watch Dosed.

“I have gotten sober and detoxed many, many, many times and not stayed sober, so obviously while the physical withdrawals are completely excruciating and definitely a big barrier to getting sober, there’s really something more to recovery than that, and that’s that kind of spiritual experience or awakening. And the psychedelic component is really important to that and I feel like that’s what’s contributed to me... not only getting sober but staying sober.” -Adrianne

“The real problem is that… people are forced to make these decisions and take these risks because something that has been known for 40 years to have this wonderful effect on opioid addicts is somehow something that nobody knows about and isn’t legalized.” -Nick Meyers

“No matter how you choose to recover or what you do to get sober and stay sober, having a community around you and staying connected with people is so, so important.” -Adrianne

“I definitely had a lot of discomfort just learning to… be still or be with myself and not have an escape. That’s part of recovery and it’s very uncomfortable. It takes time to get used to that. I was always used to having some kind of coping mechanism that took me out of myself, that just helped me not feel uncomfortable or whatever negative feeling I was feeling. So that’s always a challenge and there’s no shortcuts to that- you do have to just learn to be in your body and feel feelings, which I did not like very much. But, you know, it gets easier over time.” -Adrianne

“Everybody is so scared of just saying... ‘this is something that teens should do’ because nobody wants to have anything bad happen and then have it get traced back to them. But look at the realities of what teens are going through with... the rampant alcohol and other drugs, and… vaping and smoking and all the other vices- prescription medications, everything that’s available. And there’s like, no guidance, no supervision a lot of the time… What we’re doing right now isn’t working. Can I dare say it? It would be better if there were rites of passage with psychedelics in controlled settings with proper set, setting and dose with young people, because it really helps you recontextualize and reframe things in your mind.” -Nick Meyers 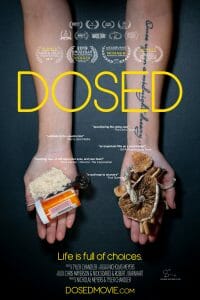 After many years of prescription medications failed her, a suicidal woman turns to underground healers to try and overcome her depression, anxiety, and opioid addiction with illegal psychedelic medicine such as magic mushrooms and iboga. Adrianne’s first dose of psilocybin mushrooms catapulted her into an unexpected world of healing where plant medicines are redefining our understanding of mental health and addiction.