info_outline
More Episodes
We're back and ready for another episode of ARTC's Podcast! This month, The Rats in the Walls-LIVE part 3 of 4, performed live at the Academy Theatre in October 2012. What else can we say about Lovecraft and The Rats in the Walls? Not much, really. I mean, it's creepy, it's awesome, it's classic horror. [caption id="" align="aligncenter" width="332"] 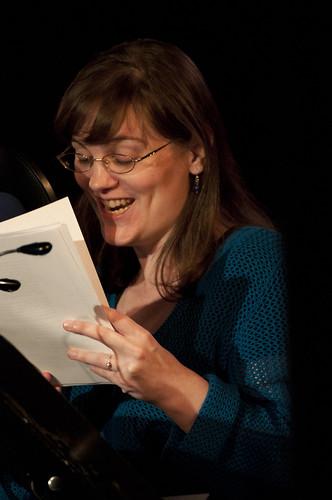 Paige Steadman wants to know what you mean by "creepy".[/caption]

So in this month's show notes, we're going to talk instead about what's coming up for the podcast. As we mention in the podcast itself, we're about to wind down on the show as you've known it for the last 10 years. We're shooting for a June launch, but we're perfectionists, so it might be July or August before we get this really ready, but when it gets moving it's going to be as hard to stop as a freight train. Which is fitting since it will be the Centauri Express Audio Magazine!

What is the Centauri Express? It's whatever you want it to be! For one thing we'll be taking a step back from our anthology format and focusing on a serialized audio drama, beginning with the full 13-episode version of Dash Cardigan! But that's not all! We'll also be featuring interviews with ARTC personnel, behind-the-scenes looks at our productions, outtakes, and user-submitted content that might take the form of reviews or previews of other audio dramas, convention reports, flash fiction, and whatever else looks interesting to us and to you, our loyal listeners. Enjoying the live performances? Fret not! The majority of the back catalog will remain online and free for the foreseeable future and future live performances will be made available as free perks for our Patreon subscribers at ALL levels. [caption id="" align="aligncenter" width="500"] 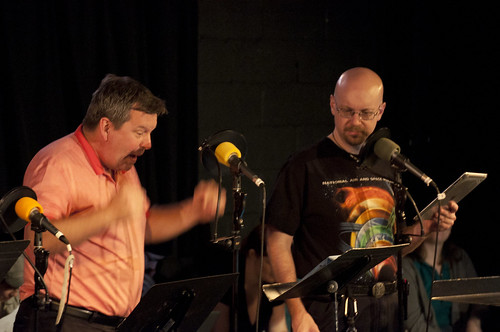 Hal Wiedeman has "feelings" about that news. David Benedict looks on, while scouting an escape route.[/caption] There's still one more part of The Rats in the Walls to go and then...well, you'll just have to stay tuned to find out what happens next. But whatever shows up next you can be sure that....There is Adventure in Sound! [caption id="" align="aligncenter" width="500"] 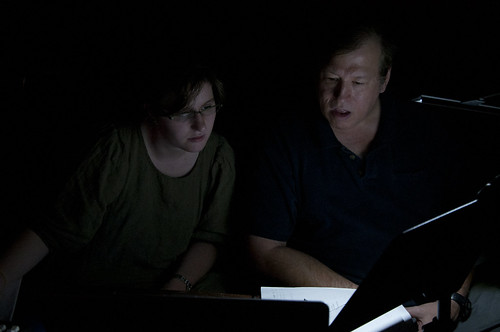 Kat Nowack and Bill Ritch are waiting with you.[/caption]